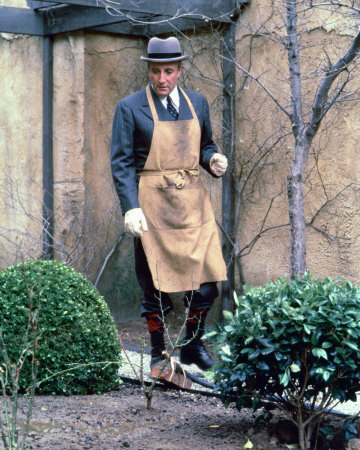 A lifetime of television viewing has not prepared him for the realities of life. A generally faithful adaptation of Jerzy N. Kosinski’s quirky novel that is blessed with the daring genius of Peter Sellers. ‘Being There’ examines contemporary America’s cultural life and finds it wanting in many ways. Sellers plays Chauncey Gardner, a middle-aged, sheltered illiterate who spends most of his waking hours watching TV, from which he gleans what little he knows of life. A bizarre series of events catapults him into the inner circle of a politically active industrialist (Melvyn Douglas), who mistakes Chauncey’s childlike rejoinders for profundity and proposes that he run for president. Directed by: Hal Ashby Starring: Peter Sellers, Shirley MacLaine, Melvyn Douglas, Jack Warden.

74. Good Will Hunting (1997) – Gus Van Sant directs a penetrating screenplay written by then unknown actors Matt Damon and Ben Affleck. ‘Good Will Hunting’ tells the story of Will Hunting (Damon), a headstrong closet math prodigy who spends his days boozing with his South Boston buddies (Affleck) and working as a janitor at MIT. A court ordered psychiatrist (Robin Williams), helps Will to confront his deep fear of abandonment and reconcile an abused past.

73. Ordinary People (1980) – Timothy Hutton is a guilt-ridden teenager in Robert Redford’s Oscar-winning directorial debut (based on Judith Guest’s novel) about the disintegration of an upper middle class family following the death of the oldest son. A straightforward psychiatrist (Judd Hirsch) helps the teen come to terms with the loss. The entire cast give Oscar-worthy performances including Donald Sutherland as the ineffective father and Mary Tyler Moore as the withdrawn mother.

72. Infernal Affairs (2002, Hong Kong) – Directed by Andrew Lau Wai-Keung and Alan Mak, this influential crime-thriller tells the story of a undercover cop (Tony Leung) who infiltrates a crime gang and a police mole (Andy Lau) secretly working for the same gang. American director Martin Scorsese remade the film as ‘The Departed’ in 2006, with Leonardo DiCaprio as the undercover cop and Matt Damon as the police mole.

71. Donnie Darko (2001) – An unconventional time-bending mystery written and directed by Richard Kelly. A troubled teenager, from a dysfunctional-family living in 1988 suburban Middlesex, Virginia, seeks the meaning of his seemingly paranoid schizophrenic end-of-the-world visions.

In less enlightened times, people will mistake it for a film about heroics. Director Zack Snyder has created an instant classic with his faithful adaptation of Alan Moore and Dave Gibbons’ critically acclaimed graphic novel. ‘Watchmen’ critiques the superhero genre and challenges the very concept of villainy. Set in an alternate universe circa 1985, a nuclear war is imminent between America and Russia. Superheroes have been forcibly retired thanks to the government-sponsored Keene Act, but that all changes with the death of The Comedian (Jeffrey Dean Morgan), a government sponsored superhero. Directed by: Zack Snyder Starring: Jackie Earle Haley, Jeffrey Dean Morgan, Malin Akerman, Billy Crudup, Matthew Goode, Carla Gugino.

69. The Lord of the Rings: The Two Towers (2002) – Based on the superior second volume of J. R. R. Tolkien’s epic trilogy, adapted by Frances Walsh and directed by Peter Jackson, intercuts three storylines as Frodo and Sam continue their quest to destroy the One Ring in Mordor and meet the insidious Gollum, its former owner.

68. The Searchers (1956) – John Ford’s timeless western (based on Alan Le May’s novel) is the story of Ethan Edwards (John Wayne), a middle-aged Civil War veteran who spends years obsessively searching for his niece kidnapped by an Indian chief.

67. The Remains of the Day (1993) – Director James Ivory’s compelling adaptation of Kazuo Ishiguro’s post-war novel tells the story of an emotionally-repressed butler (Anthony Hopkins) of Darlington Hall and the romantically disoriented Miss Kenton (Emma Thompson), who worked with him as housekeeper during the years prior to World War II.

66. Braveheart (1995) – Written for the screen by Randall Wallace, ‘Braveheart’ is a historical epic starring and directed by Mel Gibson. The film tells the story of William Wallace (Gibson), a 13th-century Scottish warrior who rallies his countrymen to combat the tyranny of England’s King Edward.

64. Fargo (1996) – Writer-directors Joel and Ethan Coen’s give us the definitive dark comedy about a car salesman (William H. Macy) who hires two men to kidnap his wife so he can swindle the ransom money from his father-in-law. The crime leads to a series of murders that a pregnant police chief (Frances McDormand) investigates.

63. The Fountainhead (1949) – Based on Ayn Rand’s novel about artistic integrity and nonconformity, director King Vidor delivers the story of Howard Roark (Gary Cooper) an idealistic, uncompromising architect who refuses to change his designs. When he finds out his plans for a public housing project have been radically altered he blows up the building and winds up in court defending his actions.

62. Blood Simple (1985) – Joel and Ethan Coen’s directorial debut is a seminal film in the independent movement. A Texas bar owner (Dan Hedaya) hires a sleazy private detective (M. Emmet Walsh) to follow then later kill his cheating wife (Frances McDormand) and her lover (John Getz) but when the detective double crosses and kills the bar owner, a series of misunderstandings build to a complex web of murder.

61. One Flew Over The Cuckoo’s Nest (1975) – Director Miloš Forman’s film adaptation of Ken Kesey’s anti-establishment novel tells the story of Randle P. McMurphy (Jack Nicholson) a career criminal who avoids a prison work detail by transferring to a mental institution run by a calm but unyielding tyrant, Nurse Ratched (Louise Fletcher) and populated by a motley crew of mostly voluntary inmates.

It’s the Eighth Wonder of the World. Director Ernest B. Schoedsack’s groundbreaking classic ‘King Kong’ is still the “Eighth Wonder of the World.” A giant ape captured in Africa by filmmaker Carl Denham (Robert Armstrong) is brought to New York as a sideshow attraction. Kong falls for starlet Ann (Fay Wray), escapes from his captors, and rampages through the city, ending up on top of the newly built Empire State Building. Moody Steiner score adds color, and Willis O’Brien’s stop-motion animation still holds up well. Scenes were cut during the 1938 re-release because of the Hays production code, including one where a curious Kong strips Wray of her clothes. ‘King Kong’ has been remade numerous times with various theme derivations, most recently in 2005 by director Peter Jackson. Directed by: Ernest B. Schoedsack, Merian C. Cooper Starring: Fay Wray, Bruce Cabot, Robert Armstrong, Frank Reicher, Noble Johnson, Sam Hardy, James Flavin, Ernest B. Schoedsack, Merian C. Cooper.

59. The Vanishing (1988, Netherlands) – Director George Sluizer’s chilling film adaptation of Tim Krabbé’s novella ‘The Golden Egg’ tells the story of a Dutchman who embarks on a obsessive three-year search to find his girlfriend who disappeared at a rest stop in France. Sluizer directed an inferior English-language remake in 1993 starring Jeff Bridges, Kiefer Sutherland and Sandra Bullock.

58. Oldboy (2003, South Korea) – Park Chan-wook directed this violent and offbeat story of punishment and vengeance. A family man is locked in a hotel room for 15 years without knowing his captor’s motives. When he is finally released, he plots revenge but finds himself still trapped in a deeply disturbing web of deception.

57. Blue Velvet (1986) – Written and directed by David Lynch, a college student (Kyle MacLachlan) discovers a severed ear in an empty lot and takes it to the police. The detective’s daughter (Laura Dern) leads him to the home of a mysterious lounge singer (Isabella Rossellini). Once inside, he steals her spare key and hides in a closet where he’s drawn into a world of kidnapping, coercion and sexual deviance all controlled by a sadistic drug dealer (Dennis Hopper).

56. Alice Doesn’t Live Here Anymore (1974) – Director Martin Scorsese’s earnest drama about Alice (Ellen Burstyn) a newly-widowed mother who leaves New Mexico, with her wisecracking son, to pursue a singing career in California but is sidetracked and forced to take a job as a waitress in Tucson, Arizona with the now classic diner archetypes, her boss Mel and fellow servers Flo and Vera. A divorced local rancher David (Kris Kristofferson) vies for her affection. The film inspired the ’80s hit TV comedy ‘Alice’.

One of the most despairing dystopian sci-fi films ever commited to celluloid. Based on Harry Harrison’s novel ‘Make Room! Make Room!’ director Richard Fleischer reunites ‘The Ten Commandments’ co-stars Charlton Heston and Edward G. Robinson. In the year 2022, overpopulation leads to depleted resources, widespread poverty and prostitutes known as “furniture” come with luxury apartments. Much of the population survives on processed food rations including “soylent green” wafers. When a NYC police detective (Charlton Heston) and a cynical retired professor (Edward G. Robinson) investigate a suspicious murder, of a board of directors member for the Soylent Corporation, the detective accidently discovers just how unscrupulous society has become. Directed by: Richard Fleischer Starring: Charlton Heston, Leigh Taylor-Young, Edward G. Robinson.

54. Eternal Sunshine of the Spotless Mind (2004) – Screenwriter Charlie Kaufman and director Michel Gondry’s surrealist depiction of heartbreak follows an introvert (Jim Carrey) who decides to have the memories of his free-spirted ex-girlfriend erased after she’s had him erased from her own memory. Midway through the procedure he changes his mind and struggles to hang on to their experiences together.

53. Alien (1979) – Director Ridley Scott’s landmark sci-fi horror thriller, based on the story by Dan O’Bannon and Ronald Shusett assisted by designs by H. R. Giger, launched a media franchise and Sigourney Weaver’s acting career. A commercial towing spaceship, lacking conventional weapons, receives a transmission of unknown origin from a nearby planet. They eventually discover a derelict extraterrestrial spacecraft with an alien creature, that gestates inside the human body, intent on picking off the crew one by one.

51. The Right Stuff (1983) – Director Philip Kaufman’s ambitious film adaptation of Tom Wolfe’s nonfiction book chronicles the history-making achievements of the unsung test pilots who were involved in the beginnings of the U.S. space program at Edwards Air Force Base as well as those selected to be astronauts for the heavily publicized Project Mercury. Cinematographer Caleb Deschanel’s (father of actresses Emily Deschanel and Zooey Deschanel) slow motion image of the original seven astronauts walking toward camera in their space suits has become iconic.