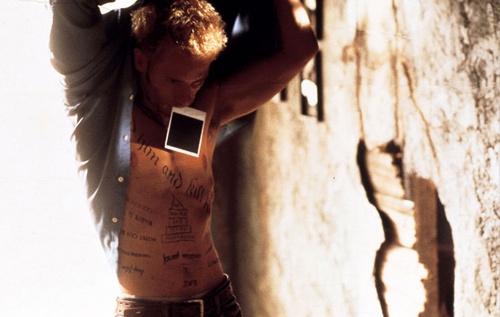 48. Breakfast at Tiffany’s (1961) – Based on Truman Capote’s novella and directed by Blake Edwards, ‘Breakfast at Tiffany’s’ gave the world the Academy Award-winning song “Moon River” by Johnny Mercer and Henry Mancini. Audrey Hepburn gives an endearing performance as a naive escort who is afraid to accept the love of a “kept man” (George Peppard).

47. Somewhere in Time (1980) – Christopher Reeve and Jane Seymour precede Leonardo DiCaprio and Kate Winslet in this romantic cult classic about ill-fated lovers. A 1972 playwright (Reeve) autosuggests himself back to the year 1912 (ironically the same year the Titanic sank). There at the majestic Grand Hotel, he falls in love with an affluent stage actress (Seymour) but is impeded by her overbearing older manager. Directed by Jeannot Szwarc, ‘Somewhere in Time’ is based on author Richard Matheson’s novel ‘Bid Time Return’.

46. All About Eve (1950) – Wonderfully written and directed by Joseph L. Mankiewicz (based on Mary Orr’s short story ‘The Wisdom of Eve’). Bette Davis stars as an aging Broadway star and Anne Baxter plays Eve Harrington, a willingly helpful young fan who maneuvers herself into Channing’s life, ultimately threatening Channing’s career and her personal relationships.

It’s ‘Eternal Sunshine of the Spotless Mind’ but without the memory loss. Woody Allen’s subjective romantic comedy chronicles the aspects of love, family, careers and anxieties. Allen plays a thinly disguised version of himself, Alvy Singer, a successful neurotic comedian living in Manhattan. Annie (Dianne Keaton) is a Midwestern transplant who dabbles in photography and sings in small clubs. When the two meet, the sparks are immediate but repressed. Despite all their caution, they connect, and we’re swept up in the flush of their new romance. Allen’s antic sensibility shines here in a series of flashbacks to Alvy’s childhood, growing up, quite literally, under a rumbling roller coaster. Directed by: Woody Allen Starring: Woody Allen, Diane Keaton, Tony Roberts, Carol Kane, Paul Simon, Shelley Duvall.

44. The Last Picture Show (1971) – Director Peter Bogdanovich’s black and white tribute to classic Hollywood filmmaking and the lost innocence of youth. There’s not much to do in the windswept Anarene, Texas, where the town’s only cinema is about to close forever. So high schoolers Sonny (Timothy Bottoms) and Duane (Jeff Bridges) lust after incorrigible flirt Jacy Farrow (Cybill Shepherd) while trying to chart their uncertain futures. When Duane heads for Korea after joining the service and Jacy gets shipped off to college, Sonny is left behind in a veritable ghost town. Based on the novel by Larry McMurtry.

43. Rear Window (1954) – Alfred Hitchcock’s classic suspense drama centers around a prying newspaper photographer (James Stewart) recuperating from a broken leg while he passes the time observing his neighbors through his window. When he sees what he believes to be a murder, he decides to solve the crime with help from his beautiful girlfriend (Grace Kelly). The film is based on the story by Cornell Woolrich. The 2007 film ‘Disturbia’ was an unauthorized modern day retelling.

42. Singin’ In The Rain (1952) – A grand musical comedy beyond compare, about the motion picture industry in the late 1920s during the shift from silent films to talkies. Don Lockwood (Gene Kelly) and Lina Lamont (Jean Hagen) are a popular romantic silent film actors when sound comes along. Don’s best friend (Donald O’Connor) comes up with an idea to have Lina’s terrible voice secretly dubbed by an aspiring actress Kathy Selden (Debbie Reynolds), whom Don falls for. Gene Kelly and Stanley Donen direct. 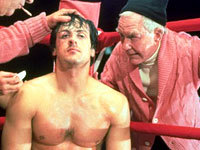 A small-time boxer goes the distance in the definitive underdog story. Written for the screen by Sylvester Stallone, ‘Rocky’ is one of those rare films that achieved both critical and commercial success. Small-time boxer Rocky Balboa (Stallone), who moonlights as a debt collector for a loan shark in the slums of Philadelphia, gets a once in a lifetime shot at the heavyweight title when the cocky undefeated heavyweight champ Apollo Creed (Carl Weathers) selects him for the 1976 Bicentennial bout. To prepare for the fight, Rocky trains physically and mentally with the legendary Mickey (Burgess Meredith) and good friend Paulie (Burt Young), a meat-packing plant worker, who lets him practice his punches on the carcasses hanging in the freezers. During training, Rocky dates and falls in love with Paulie’s shy sister Adrian (Talia Shire). The film spawned five sequels: Rocky II, III, IV, V and Rocky Balboa. Directed by: John G. Avildsen Starring: Sylvester Stallone, Talia Shire, Burt Young, Burgess Meredith, Carl Weathers.

39. The Matrix (1999) – Writer-directors Larry and Andy Wachowski’s, anime-inspired, philosophical sci-fi action film tells the story of a computer programmer (Keanu Reeves) that leads a secret life as a hacker under the alias “Neo” and begins to receive messages from a group of mysterious underground hackers Trinity (Carrie-Anne Moss) and Morpheus (Laurence Fishburne) who can help him answer the question, “What is the Matrix?”

37. Close Encounters of the Third Kind (1977) – Written and directed by Steven Spielberg. After a close encounter with an unidentified flying object, two Indiana residents, a cable worker (Richard Dreyfuss) and the mother of an alien abducted son (Melinda Dillon), are inexplicably drawn to Devil’s Tower, in rural Wyoming. In the meantime, a French government scientist (Francois Truffaut) in charge of UFO-related activities prepares for Earth’s first contact with extraterrestrials.

36. Sunset Boulevard (1950) – Billy Wilder’s classic noir black comedy about the remains of Hollywood and faded stardom. A down-on-his-luck screenwriter (William Holden) is lured into life and home of an aging former silent-film star Norma Desmond (Gloria Swanson). There he is offered a job to write her comeback screenplay to be directed by her old colleague Cecil B. DeMille, but their professional relationship evolves into that of an older woman and kept man.

34. Full Metal Jacket (1987) – Stanley Kubrick’s directs a striking violent two-part drama about the dehumanizing process that turns people into trained killers and the horrors of the Vietnam War. Marine Private “Joker” (Matthew Modine) witnesses “Private Pyle’s” (Vincent D’Onofrio) decent into insanity, from the intimidation of Sergeant Hartman (R. Lee Ermey), in boot camp at Parris Island. The second part of the film, “Joker” has become a Sergeant and Combat Correspondent accompanying the Lusthog Squad in Vietnam during the Tet Offensive. Based on the novel ‘The Short-Timers’ by Gustav Hasford.

33. Gandhi (1982) – Richard Attenborough directs the honest and heartfelt biography of Mahatma Gandhi (Ben Kingsley) about the prejudice he encounters as a young attorney in South Africa, to his nonviolent resistance movement against British colonial rule in India, and his eventual assassination. Received 8 Academy Awards including Best Picture, Director and Screenplay.

32. Superman The Movie (1978) – Based on the DC Comics character, Christopher Reeve embodies “The Man of Steel” in director Richard Donner’s adaptation of Mario Puzo’s screenplay. The planet Krypton is on the verge of destruction, Jor-El (Marlon Brando) sends his infant son Kal-El to Earth where he gains superhuman powers from the yellow sun. On Earth, the boy is given the name Clark Kent and raised in Smallville, Kansas. Later, adult Clark (Reeve) moves to Metropolis and finds work at The Daily Planet, disguised as a clumsy mild-mannered reporter, alongside cynical seasoned reporter Lois Lane (Margot Kidder). As the caped hero “Superman,” Clark must stop criminal genius Lex Luthor’s (Gene Hackman) plan to make a fortune in real estate by striking the San Andreas Fault with a nuclear missile. The film spawned four sequels: Superman II, III, IV and Superman Returns (Brandon Routh).

31. Terminator 2: Judgment Day (1991) – James Cameron’s groundbreaking sci-fi action sequel to ‘The Terminator’. A manufacturing corporation called Cyberdyne Systems uses the endoskeleton arm, from the first Terminator, to make advances in technology. Skynet sends a new liquid metal Terminator, the T-1000 (Robert Patrick), through time to kill the 10-year-old John Connor (Edward Furlong) son of Sarah Connor (Linda Hamilton). The resistance sends the T-800 (Arnold Schwarzenegger) back to protect him. Sarah, now in a mental health facility in California, teams up with her son and the T-800 to break into Cyberdyne. Together with Miles Bennett Dyson (Joe Morton) the creator of Skynet, they blow up Cyberdyne Systems in an attempt to prevent Judgment Day. The film and the following sequels inspired the television series ‘Terminator: The Sarah Connor Chronicles’.

29. Back to the Future (1985) – In this classic sci-fi adventure from director Robert Zemeckis, eccentric inventor Doc Brown (Christopher Lloyd) turns a DeLorean into a time machine that inadvertently sends his young friend, Marty McFly (Michael J. Fox), 30 years into the past. While stuck in the 1950s, Marty disrupts his parents’ (Lea Thompson, Christopher Lloyd) destiny and risks throwing the time-space continuum completely out of whack. The only way back to 1985 now is to get mom and dad to pucker up.  Written for the screen by Bob Gale and Zemeckis, followed by two sequels Back to the Future II and III.

27. Nineteen Eighty-Four (1984) – Director Michael Radford’s detailed adaptation of George Orwell’s dystopian novel that manages to recreate characters, settings and aesthetic without losing anything in translation. Set in the totalitarian state of Oceania, the film follows the illegal love affair between bureaucratic bookkeeper Winston Smith (John Hurt) and Ministry of Truth worker Julia (Suzanna Hamilton). Smith attempts to defy the crushing inhumanity and lack of simple pleasures of an omniscient Big Brother, the autocratic symbol of an oppressive regime. Things go from bad to worse when a high-ranking member of the government, O’Brien (Richard Burton), who has looked upon Smith as a protégé, discovers the rebellion.

26. Chariots of Fire (1981) – Hugh Hudson directs an inspirational true story of two determined British athletes Eric Liddell (Ian Charleson), a devout Protestant Christian compelled by his love of God, and Harold Abrahams (Ben Cross), a highly competitive Jewish Cambridge student who has to overcome anti-Semitism, competing in the 1924 Summer Olympics in Paris. Winner of four Academy Awards including Best Picture and Best Original Screenplay (Colin Welland). Features one of the most memorable scores of all time, Vangelis’s instrumental hit “Titles.”

See the full list of 2016 Oscar nominations for the 88th Academy Awards.