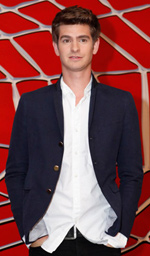 Andrew Garfield talks about being a Spider-Man comic book fan, the costume and receiving Tobey Maguire’s support. British actor Andrew Garfield recently spoke with the UK’s BBC Breakfast about his work in the Golden Glode nominated film The Social Network and the upcoming UK release of Never Let Me Go, but it was his lengthy talk about the highly anticipated Spider-Man reboot that was the most interesting.

How does it feel to go from acting in intense dramas to playing a comic book superhero hero?

Andrew Garfield – “I feel like comic books are our Greek mythology. The themes that Stan Lee was writing [about] in his comics are the same thing you’ll find in Shakespeare or Aeschylus or in Greek tragedies. I feel like the same human themes are in there, it’s just under a different kind of guise.”

Are you a big comic book fan?

Andrew Garfield – “I’m massive yes. Spider-Man was the one for me since I was four years old. There’s a picture, which I’m sure people will eventually see, of me in the costume when I was five years old. At some point I’m sure that will be leaked.”

Have you ever met Tobey Maguire?

Andrew Garfield – “I’ve never met him. [But] he sent me a lovely message through a mutual friend. He gave me his support and it meant a great deal of course because a part of the reason I loved this character was because of his portrayal. To step into those shoes is no mean feat. It was generous of him to reach out and say something, so I’m really thankful.”