[ad name=”468×60-text-ad”]
Warner Bros. has revealed the first official photo of Superman in Batman v Superman: Dawn of Justice. In a new USA Today interview, director Zack Snyder confirms we will see Superman in Batman’s Gotham City, explains why the title contains a “v” instead of “vs.” and says that he hasn’t filmed any scenes with Gal Gadot as Wonder Woman yet, but has filmed a few scenes with Henry Cavill and Ben Affleck together. You can check out the photo along with the full interview below. The director of last year’s Man of Steel doubles down on A-list superheroes in his follow-up Batman v Superman: Dawn of Justice (in theaters May 6, 2016), teaming a returning Henry Cavill as the big guy in the cape and “S” on his chest with Ben Affleck as the latest cinematic incarnation of the Dark Knight.

By bringing in more DC Comics do-gooders such as Wonder Woman (Gal Gadot) and Cyborg (Ray Fisher), the new movie is thicker, denser and more epic than Man of Steel, according to Snyder. And it’s also the next step toward building a strong movie universe that ultimately leads to Snyder’s Justice League, the supergroup answer to Marvel’s The Avengers, tentatively scheduled for a 2018 release.

Now filming in Detroit, Dawn of Justice is pretty much a thrill every day for the admitted comic fan. “It’s not an un-fun job, I will say that,” Snyder says.

Man of Steel was all about Superman finding his place in the world as both a hero and as a man, ultimately saving the city of Metropolis from certain doom. Dawn of Justice continues to immerse him on Earth by working at the Daily Planet as Clark Kent along with Lois Lane (Amy Adams) and Perry White (Laurence Fishburne). But it also takes him to new environments such as Gotham City and introduces larger threats, including Lex Luthor (Jesse Eisenberg).

Really digging in and evolving the character — both as Clark and as Superman — is a challenge, Snyder says, but there’s also “the fun of trying to figure out what to put in front of him that’s difficult.”

Cavill is definitely more comfortable in the role the second time around, says the director.

“We’ve both created this guy and we can push him around a little bit,” he says. “The more time I spend with Henry, the more he’s Superman to me.”

The debuting heroes Superman meets will affect his perspective on Earth and on the ones he loves, and Snyder feels his convictions will be drawn into question as well.

When developing Man of Steel, Snyder didn’t harbor dreams of one day putting Batman on screen, too — he figured he’d one day tackle an adaptation of Frank Miller’s seminal 1980s masterpiece The Dark Knight Returns, which pits a retired Batman against government agent Superman.

It ultimately made sense with Dawn of Justice to add Bruce Wayne and his cowled alter ego to the mix. Because of Christopher Nolan’s recent Dark Knight trilogy, “I was in no rush to put Batman in the movie,” Snyder says, “but on the other hand it seemed organic the way our story was unfolding to start to feather him in.”

Instead of using several movies to define Affleck’s Batman, Snyder felt the character’s 75-year mythology is so deep in culture now that they can just jump to an older, road-weary take on the Dark Knight. Plus, he says, “it’s cooler to see a crusty old Batman beating the snot out of guys.”

The director can’t say exactly how the relationship between the two superheroes evolves, “but suffice it to say there is a ‘v’ in between their names” in the movie title, Snyder says. He explains that having the “v” instead of “vs.” is a way “to keep it from being a straight ‘versus’ movie, even in the most subtle way.”

Snyder’s only done a few scenes so far with Cavill and Affleck together, but the historical significance isn’t lost on him, he says. “It’s never really been done and it’s kinda cool.”

Similarly, Snyder also knows that putting the iconic superheroine Wonder Woman on a movie screen is a big deal, too. He says he hasn’t filmed any scenes with Gadot as the Amazonian princess yet, but “she’s working out and getting buff and ripped.”

While Snyder is surprised in a way that fans are already so pumped for Dawn of Justice, he also understands the anticipation.

“You can talk all you want about other superhero movies, but it’s Batman and Superman, let’s just be honest,” Snyder says. “I don’t know how you get bigger than that.” 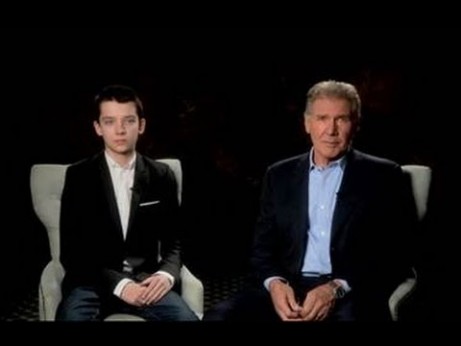