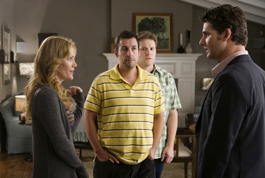 Synopsis: Over the past few years, writer/director Judd Apatow (The 40-Year-Old Virgin, Knocked Up) has shown that nothing—not even losing your virginity or the miracle of childbirth—is sacred. About his third film behind the camera, he says, “I’m trying to make a very serious movie that is twice as funny as my other movies. Wish me luck!”