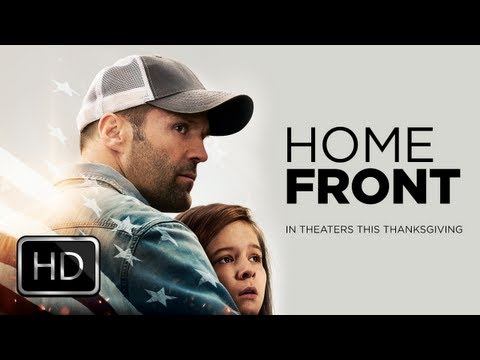 [ad name=”468×60-text-film-ad”]
Jason Statham, James Franco, Winona Ryder and Kate Bosworth star in the action thriller Homefront written by Sylvester Stallone and based on the book by Chuck Logan. Watch the trailer for Homefront below. A former DEA agent (Statham) moves his family to a quiet town, where he soon tangles with a local meth druglord (Franco).

HOMEFRONT stars Jason Statham as former drug enforcement agent, Phil Broker, a family man who moves off the grid with his daughter, to a seemingly quiet bayou backwater to escape his troubled past. However, Broker’s world soon becomes anything but quiet once he discovers that an underbelly of drugs and violence riddles the small town. Soon, a sociopathic methamphetamine kingpin, Gator Bodine (James Franco) puts Broker and his daughter in harm’s way forcing Broker back into action in order to save his family and the town.

[ad name=”468×60-text-film-ad”] Movie Trailer and Poster for The Purge. Ethan Hawke, Lena Headey and Rhys Wakefield star in the home invasion thriller The Purge. See the movie trailer, photos and…