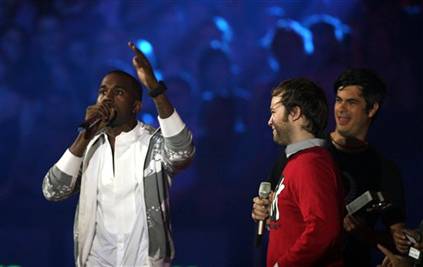 Watch a disappointed Kanye West storm the stage when Justice and Simian are presented the Best Video award at the MTV Europe VMAs back in 2006. In a tirade riddled with expletives, West said he should have won the prize for his video “Touch The Sky,” because it “cost a million dollars” and Pamela Anderson was in it.
[ad name=”300×250-img-ad”]

[ad name=”468×60-text-ad”] When Shakira first arrived on the Latin music scene the industry coined her the next Madonna for her edgy look and no holds barred approach to music. These…

Jerry, Elaine, Kramer and George are back after 11 years! Extra goes behind the scenes of the ‘Seinfeld’ reunion on HBO’s ‘Curb Your Enthusiasm’. Three of the four stars of…

Bruno Mars will join Coldplay and Beyonce for the Super Bowl 50 halftime show.