Kevin Hart, Bryan Cranston and Nicole Kidman star in the dramatic comedy The Upside, a remake of the French hit ‘The Intouchable’ (2011). About the unlikely friendship between a rich quadriplegic and his working-class caregiver on parole. Watch the trailer below! 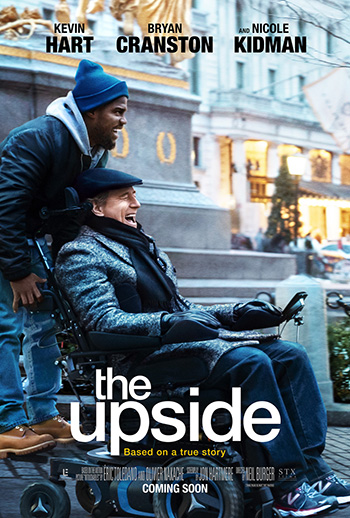 Dell (Hart) has little confidence that life holds many promises for a man with a criminal record, no formal education, and no financial safety net. He shows up as a candidate for the position of caregiver to millionaire author Phil (Cranston) wanting only a signature to show his parole officer. Yet Phil, despite strenuous protests from his assistant Yvonne (Kidman), insists on hiring the wholly unqualified Dell on the spot.

Phil is quadriplegic, a grief-stricken widower, and, like Dell, running short on hope. Divided by race, class, and ability, these men could not be farther apart. Yet if they can bridge their differences, they may just discover a rare breed of friendship — and teach each other to live again.