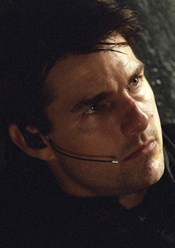 After the success of the first three “Mission: Impossible” movies, some wondered whether the series would finish within the framework of a traditional trilogy. Now, four years after Ethan Hunt’s last adventure, a call has gone out for another adventure, and Tom Cruise has chosen to accept it.

Paramount Pictures announced Tuesday (February 9) that it will be making “Mission: Impossible IV,” targeting a Memorial Day 2011 release. Although “Mission: Impossible III” director-turned-“Star Trek”-mastermind J.J. Abrams will not return to direct the next film, he will produce with Cruise through his Bad Robot Productions.

“Tom and J.J. are great talents,” Paramount Pictures chairman and CEO Brad Grey said in a statement announcing the deal. “We are excited to be working with them to re-launch this legendary franchise.”

Screenwriters Josh Applebaum and Andre Nemec (“Life on Mars”) are writing the script, based on an original idea by Cruise and Abrams. The duo are currently working with the studio to find a director for the project.

Read the full article at MTV.com