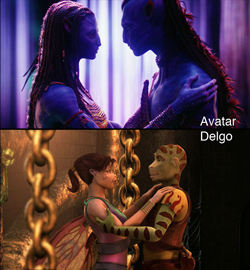 In a landscape of sequels and remakes, one of the most expensive films in history, Avatar, is being compared to a low-budget Fathom Studios, independent, CG-animated feature, Delgo, produced by Fathom Studios.

The much anticipated Avatar trailer was released online last week and viewer traffic overwhelmed Apple.com’s trailer site. Almost immediately, reactions were posted on the internet with comments like “Avatar = Delgo,” “Avatar is Basically Delgo II,” and “The 7 Eeriest Parallels Between Avatar and Delgo.”

USA Today’s Pop Candy Blog, New York Magazine and even Huffington Post joined in the discussion circulating the web for the past several days associating James Cameron’s new film, Avatar, with the independently-produced, animated feature, Delgo, which was released in theaters last year.

S.T. Vanairsdale of Movieline said, “James Cameron seems to have been influenced by some similar visuals and themes,” going on to declare the two films share “uncanny parallels.” WorstPreviews.com cited that the “characters and the universes of both films are almost identical.” Online movie critic, JoBlo, said Avatar and Delgo were “undeniably similar,” also noting that a side-by-side comparison of the two films was “pretty damn conclusive and practically warrant a likeness lawsuit from the lowest grossing movie ever to be filed against the director of the highest grossing movie ever.”

Fathom Studios, the Atlanta-based production company behind Delgo, was bombarded with emails as soon as the Avatar trailer went live. A spokesperson for the studio said, “From what we have seen, we are amazed by the visual similarities between the two films and we are reviewing what legal options may be available to us.”

Delgo is an independent film that took over a decade from conception to release. The initial proof-of-concept was available on Delgo.com in 1998 with work-in-progress from the feature production accessible via the website’s Digital Dailies since 2000 (http://www.delgo.com). According to The Hollywood Reporter, Avatar began production in 2006 after a rewrite of the script.

Delgo was the first independently-produced CG animated feature made in the U.S. It was released on DVD on August 4th, 2009. Source: Fathom Studios

Compare photos of the two films ‘Avatar’ and ‘Delgo’