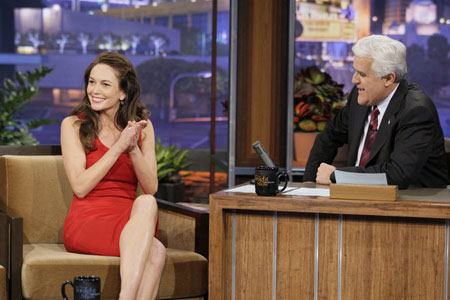 [ad name=”468×60-text-ad”]
Diane Lane Talks Superman on The Tonight Show. Super sexy Diane Lane appeared on The Tonight Show with Jay Leno last night to promote the HBO feature “Cinema Verite,” in which she stars opposite Tim Robbins and James Gandolfini. Before discussing her current project, Leno asked her about being cast as Clark Kent’s mother in the new Superman movie Man of Steel to be directed by Zack Snyder.

“I’m not allowed to talk about it. It’s top secret,” Lane playfully told Leno. “I’m playing Martha Kent. I’m going to be in one of those huge movies!” The production really is top secret but Lane revealed she has read the entire script not just her parts. “I had to read the script under lock and key in a room,” Lane said of the film, which will star Henry Cavill as the Man of Steel. “You go to the offices and it’s a locked door. And the curtains are drawn.”