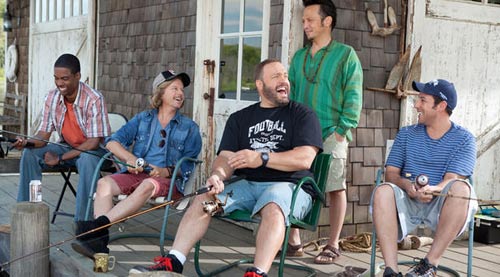 “Grown Ups,” starring Adam Sandler, Kevin James, Chris Rock, Rob Schneider, and David Spade, is a comedy about five friends and former teammates who reunite years later to honor the passing of their childhood basketball coach. With their wives (Salma Hayek, Maria Bello, Maya Rudolph) and kids in tow, they spend the Fourth of July holiday weekend together at the lake house where they celebrated their championship years earlier. Picking up where they left off, they discover why growing older doesn’t mean growing up.