Lionsgate Home Entertainment has announced the DVD release of ‘Tyler Perry’s Madea Goes To Jail’ starring Tyler Perry, Derek Luke and Keshia Knight Pulliam. The DVD includes six featurettes that cover the hilarious characters and the making of this outrageous film! Available in Widescreen and Full Screen versions, ‘Tyler Perry’s Madea Goes To Jail’ will be set free on June 16, 2009. You can view the DVD cover art and specs below.

Synopsis
After a high-speed freeway chase puts Madea in front of the judge, her reprieve is short-lived as anger management issues get the best of her and land her in jail. A gleeful Joe couldn’t be happier at Madea’s misfortune. But Madea’s eccentric family members, the Browns, rally behind her, lending their special “country” brand of support.

Meanwhile, Assistant District Attorney Joshua Hardaway is on the fast track to career success. He lands a case too personal to handle, defending young prostitute and former drug addict Candace Washington, and asks his fiancée and fellow Assistant District Attorney Linda Holmes to fill in on his behalf. When Candace ends up in jail, Madea befriends the young woman, protecting her in a “motherly” way as only Madea can. 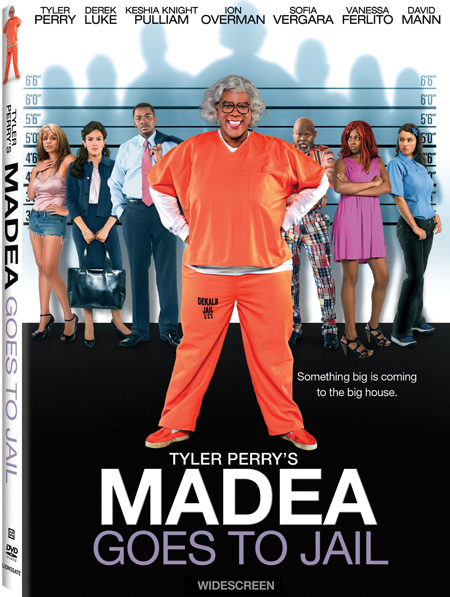