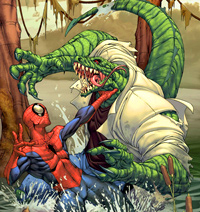 Long before Columbia Pictures make an official announcement Movienewz.com can confirm we know what character will likely be the central villain in Spider-Man 4. I have a “system” that I won’t completely share with you, however I will backup the conclusion with some factual evidence below.

What I will share about my “system” is that it has a lot to do with the studio’s need to market the character before the film is released. They do this before every Spider-Man film I assure you. This is why I have successfully guessed the main villain for the last two Spider-Man films long before they were officially announced. That’s a pretty good track record. So without further ado, the next Spider-Man movie villain will be “The Lizard” aka Dr. Curt Connors. Dr. Curt Connors was played by actor Dylan Baker in the last two Spider-Man movies but I can’t confirm he will reprise the role. Since most of the scenes with “The Lizard” will be CG, the studio may overlook the fact that Baker isn’t a “big name”.

In a recent interview ‘Spider-Man 4’ producer Todd Black told the NY Post “We’ll be shooting in New York again. Trust me, people will appreciate who we pick, because it’ll be a big part of New York.”

Black was most likely referring to the gargoyle architectural structures that are prevalent throughout New York City. It just so happens that winged gargoyles play a role in the plot of “Spider-Man: Valley of the Lizard” the paperback novel that features Spider-Man’s long-time nemesis The Lizard.

Black also confirmed that the villain will be one of Spider-Man’s foes from the comic, not a character invented for the film.

The Lizard first appeared in The Amazing Spider-Man #6 (November 1963), and was created by comic book writer Stan Lee and artist Steve Ditko. Lee and Ditko also created The Green Goblin, Doctor Octopus and Sandman – the main villains in the previous Spider-Man feature films.

Dr. Connors became obsessed with uncovering the secrets of reptilian regeneration, and studied reptilian biology extensively. He finally determined a serum taken from the DNA of a reptile. He had successfully regrown the missing limb of a rabbit, and, despite the warnings of his wife, chose to test it on himself. Connors ingested it, and his arm did indeed grow back. Unfortunately, it had one side effect: Connors was subsequently transformed into a reptilian monster!

Black also mentions “We’re just coming up with who the villain’s going to be now.” We know that can’t be true. That would mean there is no script or even a plot outline. We know from previous press interviews that Tobey Maguire and Kirsten Dunst would only do another Spider-Man film “if the script was good.” It also takes years to do post production work on the Spider-Man films. With a release date of Summer 2011 the CG work must begin at least two years before.

Let me reiterate, nothing that I have written here is the central reason why I believe The Lizard will be the main villain in Spider-Man 4. My “system” is based on a specific marketing trend pure and simple. Sony/Columbia Pictures want us (the viewing audience) to find this character familiar by the time Spider-Man 4 arrives in theaters May 6, 2011.

See the complete list of winners for the 73rd Annual Golden Globes.