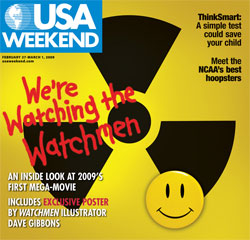 This latest issue of USA WEEKEND has an exclusive poster inside drawn for the newspaper-inserted magazine by ‘Watchmen’ illustrator Dave Gibbons. The following is an excerpt from the article.

Don’t be surprised if you see President Obama suddenly sporting a yellow smiley face on his lapel next to the American flag pin.

The world’s most famous comic book geek could well be one of countless fans psyched about the impending release of the new movie “Watchmen.” The smiley face is one of the cult fave’s iconic symbols.

Based on the graphic novel named by “Time” as one of the greatest novels of the 20th century, “Watchmen” has taken more than 20 years to morph into a movie.

Maybe it was the large, blue and very nude Dr. Manhattan or the gritty Cold War-era setting (with Richard Nixon in his fifth term as president, no less) that put off Hollywood. For its legion of fans — and the newbies who have gotten their hands on the more than 1 million copies of the graphic novel printed since the movie trailer premiered last summer — the wait ends March 6, when “Watchmen” opens in theaters nationwide.