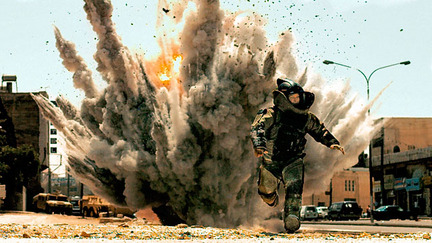 The science-fiction sensation “Avatar” and the war on terror thriller The Hurt Locker lead the Academy Awards with nine nominations each, including best picture and director for former spouses James Cameron and Kathryn Bigelow. For the first time since 1943 the Oscars feature 10 best-picture contenders instead of the usual five.

Also nominated for best-picture Tuesday: “District 9”; the animated comedy “Up”; the World War II saga “Inglourious Basterds”; the football drama “The Blind Side”; the recession tale “Up in The Air,” the 1960s drama “A Serious Man,” and the teen tales “An Education” and Precious: Based on the Novel ‘Push’ By Sapphire.

Acting nominees include the four stars who have dominated early awards shows: lead players Sandra Bullock for the football drama “The Blind Side” and Jeff Bridges for the country-music tale “Crazy Heart” and supporting performers Mo’Nique for “Precious” and Christoph Waltz for “Inglourious Basterds.”

The best-picture and director categories shape up as a showdown between ex-spouses who directed films that have dominated earlier Hollywood honors.

Cameron’s “Avatar” won best drama and director at the Golden Globes, while Bigelow’s “The Hurt Locker” beat out Cameron at the Directors Guild of America Awards, whose recipient usually goes on to earn the best-director Oscar.

“The Hurt Locker” also beat “Avatar” for the Producers Guild of America top prize and was chosen as last year’s best film by many key critics groups.

[ad name=”468×60-text-film-ad”] Check out an advanced movie screening of the upcoming comedy The Five Year Engagement, starring Jason Segel and Emily Blunt. The cast of the movie will host an…

Michael Bay has confirmed that he will return to direct the upcoming Transformers 5.