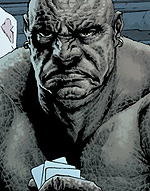 You read that right. Killer Croc could be the next big villain along with the Riddler in the third “Batman” film aka “The Dark Knight Returns.” Director Christopher Nolan is full of surprises and the secretive filmmaker may have a big one in store for Batman fans. Edward Nigma (The Riddler) is pretty much a lock as the central villain in “Batman 3” but we’ve just learned that Nolan may use an all new incarnation of Waylon Jones (Killer Croc) as the next crime kingpin of Gotham City.

Both Nolan “Batman” films have been inspired by graphic novels. This time the groundbreaking filmmaker may use the “Joker” graphic novel, written by Brian Azzarello and illustrated by Lee Bermejo, as inspiration to make Killer Croc a believable character and viable threat to the Caped Crusader. In the GN, Killer Croc resembles a scaly skinned Michael Clarke Duncan (sorry Mike), rather than a monster crocodile and the Riddler appears as a crippled thief with question mark tattoos around his navel.

The Killer Croc character has appeared in ‘The Batman’, ‘The New Batman Adventures’ and ‘Batman’ animated series’ voiced by many actors including Ron Perlman (Hellboy). With the third “Batman” film rumored to begin production in New Orleans (home of the killer crocodiles) next April; the rumor mill is churning out lots of talk. Check back with us for further updates about The Dark Knight Rises.
[ad#facebook-like-box-bottom]

Is Warner Bros. Casting The New Superman Movie Around Actor Ben Affleck? We doubt that director Zack Snyder’s Man of Steel will have any similarities to the slow-moving drama Hollywoodland…